The inhabitants of Collooney – a small town in Ireland – made a shocking discovery after a violent storm ripped through the area. A 200-year-old beech tree toppled over, revealing what could be a medieval murder scene. While it’s not uncommon for storms to uproot trees, it’s not every day one finds a skeleton dangling from the tree’s roots. In a bizarre and grisly twist, only the upper portion of the skeleton was attached to the tree roots, with the legs buried in a grave below. 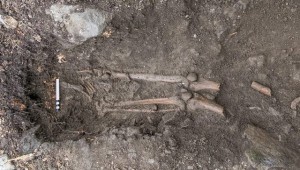 Preliminary analysis indicates the bones are around 1,000 years old and belonged to a young man between the ages of 17 and 25. It was apparent the young man suffered an extremely violent death as the bones showed signs of several wounds inflicted by a sharp object, such as a knife or sword. Radiocarbon analysis shows the body was buried in a shallow grave sometime between 1030 and 1200 AD.

Currently, it’s unclear whether or not this young man died in battle or was perhaps murdered in some sort of quarrel. Archaeologist Marion Dowd told Irish Archaeology, “No other burials are known from the area but historical records do indicate a possible graveyard and church in the vicinity.” Further analysis will hopefully tell us more about the young man and how he died.